A new release from Lizard Breath Records is here!
Available for immediate release!

Intersecting Parallels is duo recording of improvised pieces and is the culmination of a musical relationship of more than two decades.  When Krzysztof arrived in Chicago from Poland he was already a young virtuoso protégé of Krzysztof Penderecki with extensive experience in contemporary classical/European music. After arrival he soon began digging deep into the storied Chicago jazz and improvised music scene. This is when he met Dan who had recently arrived in Chicago after several years in the NYC scene and was putting together various original music projects many of which included Krzysztof. They have since performed together in nearly every setting from the festival stage, tours to club dates. They are also on more than a dozen recordings together including Chicago Edge Ensemble, Quartet Next, Dan Phillips Trio, Quartet and more. However, this duo recording is their first truly collaborative project and the results should and will speak for themselves. 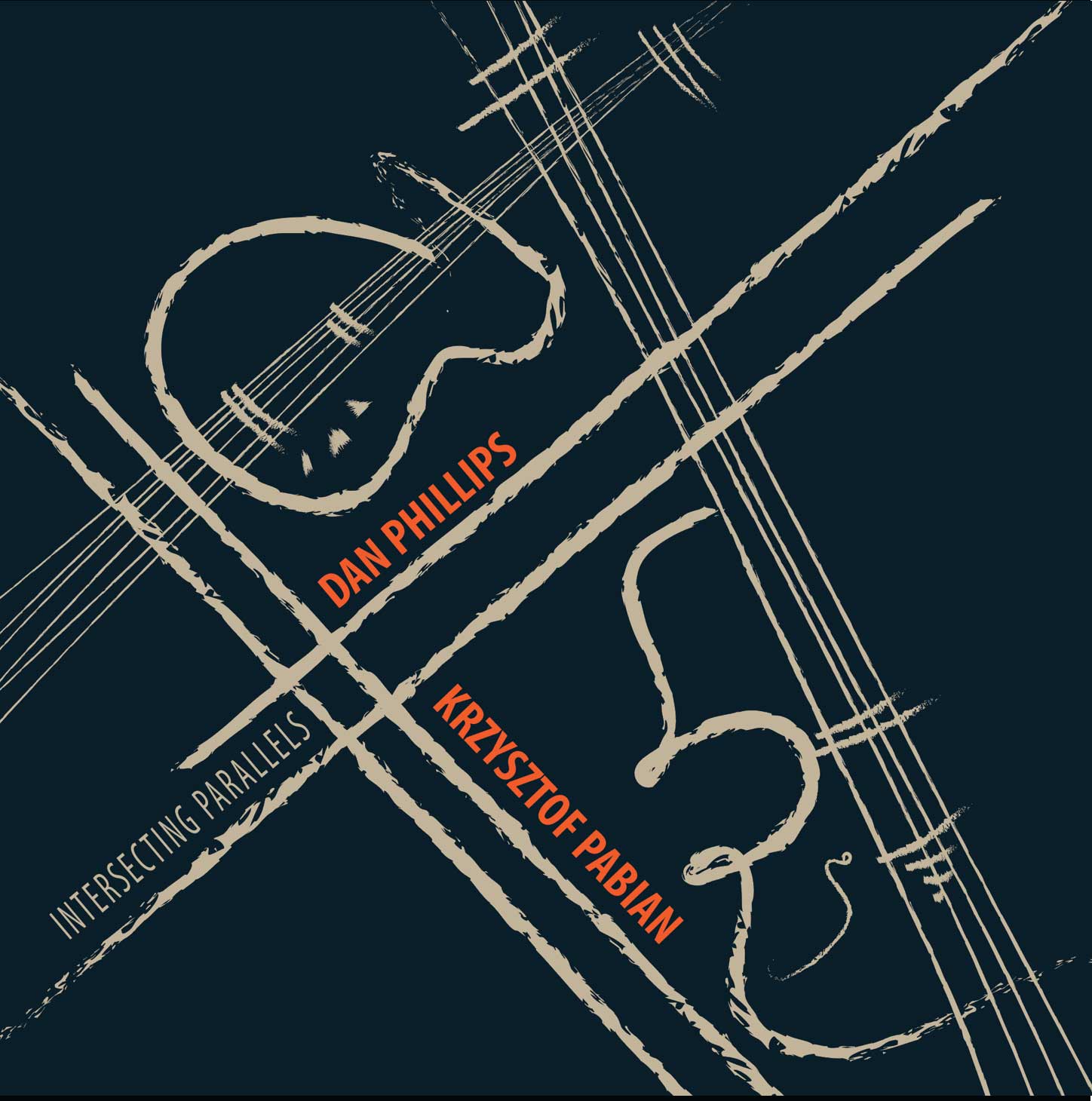 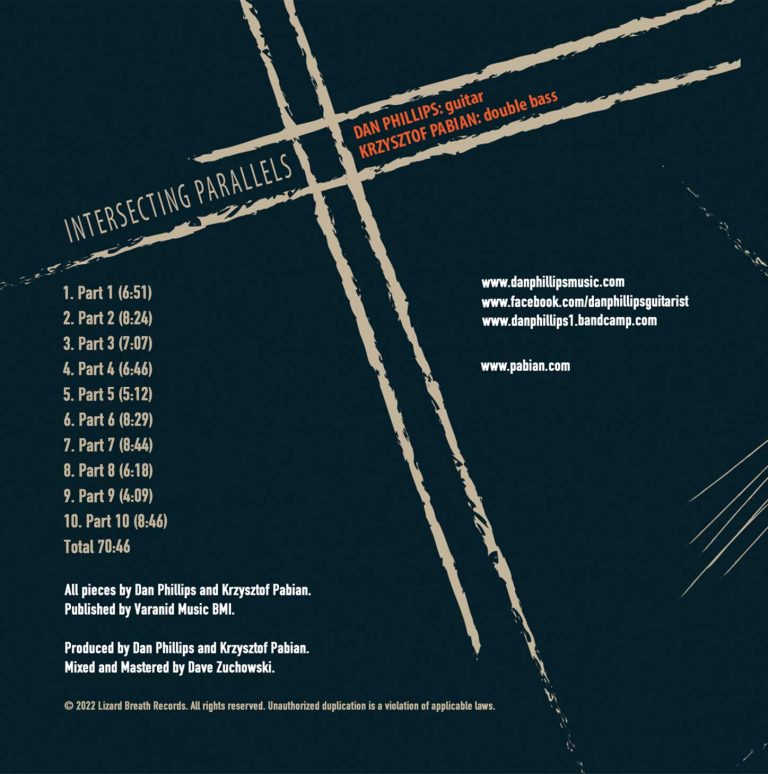 Krzysztof Pabian  hails from Europe as a classical-trained bassist. He began his music studies at the age of 8 on piano and switched to bass at age 14. Krzysztof moved to the U.S. in 1993 where he studied at Northwestern University to graduate with two Masters degrees in jazz and classical double bass performance. Krzysztof has performed with the Chicago Symphony Orchestra and the Chicago Civic Orchestra and worked in an array of ensembles under the direction of Pierre Boulez, Daniel Barenboim, Christopher Eshenbach, Zubin Mehta, George Solti, Lawrence Foster, and Pinchas Zukerman to name a few. In the area of jazz Krzysztof has performed with Danilo Pérez, Judy Roberts, Eddie Henderson, Max Roach, Ron Blake, Hamid Drake, Mars Williams, Jarek Smietana and the Lincoln Center Jazz Sextet. Krzysztof has toured throughout North America and Europe with various groups and configurations.

What reviewers have said about Dan Phillips’ previous work:

“A strong sense of melody and deft control of his instrument, it seems, is all Phillips’ needs to convey his musical ideas……Phillips has something to say. By the time we get to “Shape 24” things have both changed and not. Employing overtones and a more percussive impact on the strings, the music is still moving, evolving, and interesting. Apparently the first solo offering from Phillips, and a solid two and a half hours of music.”
Review of “Shapes of Things’ Freejazzblog 2021

“He’s a surgical technician when he wants to be, paring his notes down to their molecular formulas in “Once a Forested Hill” and “Void Illusion” or he open up the possibilities with some indulgent abandon.”
Review of Dan Phillips Trio Sound Energy in Space allaboutjazz 2019

“The musicians are demonstrating their own style and sound – they don’t hesitate to take on adventurous and bright improvisations, moody and dynamic twists, passionate blowing that go down to peaceful, sad, light and solemn pieces. The variety of moods and expressions effects an emotional, impressive and dynamic sound that is constantly changing.”
Review of Dan Phillips Quartet Light at Depth Avantscena 2019

“The music on this album is filled with surprises and incredible turns., the musical language is rich expressive, vivid and incredible.”
Review of Chicago Edge Ensemble Insidious Anthem Avantscena 2018

“The compositions begin with and intricate and complex sonic architecture or quiet, searching textures that highlight the rich palette of the ensemble…Phillips sets the basic theme and the overall atmosphere. Later these parts mature into collective, free jazz improvisations that enjoy the full power and the soulful sound of the ensemble.”
Review of Chicago Edge Ensemble Insidious Anthem Salt Peanuts 2018

“With each release Phillips’ sound continues to mature and expand. What remainsunchanged is his imaginative creativity and his restless inventiveness. These and his shared musical vision with his sidemen- accomplished artists in their own right are what make this recording an absorbing musical treat.”
Review of Dan Phillips Trio Divergent Flow Chicago Jazz Magazine 2018”

“Chicago Edge Ensemble is an all terrain vehicle, a quintet equally capable of negotiating the bumpy-smooth contours of swinging post bop, the banked hairpin turns of fusion funk, the fog and ether AACM-style intrigue and the tumultuous thicket that awaits if you gleefully careen off the road.”
Review of Chicago Edge Ensemble Decaying Orbit Jazz Times 2017

“Phillips in particular proves why he’s the most under-appreciated electric guitarist from the Chicago area. There’s no hesitation or sense of compromise on Decaying Orbit. As the band name implies, this is jazz and improvisational material which goes to the edge, stays there and doesn’t retreat.”
Review of Chicago Edge Ensemble Decaying Orbit Audiophile Magazine 2017

“With it’s palpable personality, rigorous but approachable compositions, and sure footed sense of self, Chicago Edge Ensemble’s Decaying Orbit not only pays homage to the city that Phillips’ loves, but solidly places him on the map as a formidable instrumentalist and composer. It’s a treat to hear him play with such a first rate band of some of Chicago – and the world’s – greatest musicians.”
Review of Chicago Edge Ensemble Decaying Orbit Broadway World 2017

“Chicago jazz is the complexity of the postmodern with a predisposition for rump shaking. The Quintet rarely lowers the flame below boiling.”
Review of Chicago Edge Ensemble Decaying Orbit allaboutjazz 2017

“This is a fine album of interesting themes and powerful performances by the full ensemble and the soloists. Everyone draws deeply from the limitless well of the city’s musical history and creates a bold and thoughtful statement.”
Review of Chicago Edge Ensemble Decaying Orbit jazzandbluesbloagspot. 2017